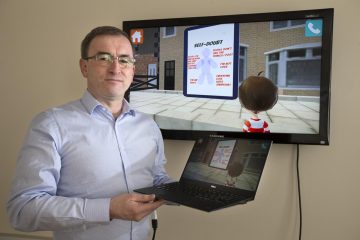 ‘What we’re trying to do is not so much give kids information but teach them skills for the 21st century,’ says Joe Kenny, founder of Zeeko, in the NovaUCD campus. Photo: Tony Gavin

Educating our children on the finer points of being safe online has to be one of the key challenges of our times. But while few would disagree on the urgency of this issue, there are surprisingly few organisations or companies providing appropriate education materials and content to help children become digitally literate.

Into this large hole leapt Joe and Linda Kenny back in 2013, when they decided to set up Zeeko, a firm that produces online educational modules and interactive seminars for schools, parents and children on how to stay safe online and deal with cyber-bullying.

Driven by concerns about the “hurt and extreme consequences created in young people’s lives due to the internet”, the company has developed rapidly since it was set up in 2013. It now employs a team of 22 in creating and marketing content that has so far educated more than 100,000 children, 9,000 teachers and 6,000 parents across Ireland and the UK.

It started off with seminars at a number of schools but, with input from parents, teachers, kids and psychologists, the firm created the online education platform they market today, which provides online seminars in a number of different formats for primary and secondary schools and parents, and which cover such subjects as cyber-bullying, inappropriate content, digital footprints, excessive screen time, data privacy, online relationships and digital stranger danger.

“A lot of the way kids have been taught in the past has been through rote learning. What we’re trying to do is not so much give kids information, but teach them skills for the 21st century – including critical thinking,” says Joe Kenny, who is CEO while his wife, Linda, is chief financial officer. The couple have two young children.

Kenny acknowledges that, very often, the kids will already know more than their parents about it – or at least claim they do. “It’s definitely a paradox and contradiction but it’s also an opportunity, which is to empower children to basically engage with parents around the challenges that they face online.”

Zeeko’s products can also facilitate what Kenny calls ‘active mediation’, where challenges that arise at home while online can be used at learning opportunities.

They’ve also started to research the impact on children’s health of virtual reality (VR) technology. Using €100,000 in funding won last year through the European Commission’s Horizon 2020 SME Innovation Associate programme, the company is running an ethnographic study led by psychologist Dr Marina Everri which monitors children’s activities with VR in various day-to-day situations at home and at school, and use that information to create new solutions to any negative effects that it is shown to cause.

It has started to sell basic, paid trials of a VR education solution to primary schools that aims to teach children about the impact of bullying, which Kenny describes as an “intersection of technology with cyber-psychology”.

“So really the value proposition there is, through that immersive experience, we can allow children to experience the same situation from different perspectives – the perpetrator, the victim and the bystander. And what that does is allows them to kind of build their empathy with different actors within the area and basically increase their self-regulation, which is basically something that every child needs to learn through their life and as humans or as adults,” said.

Zeeko is also working with UCD computer scientist Dr Anthony Ventresque to use artificial intelligence to deliver customised content to each child, based on their individual needs.

The company’s aim to reach 1.5 million children within five years might seem ambitious, but the goal from day one was to build products that were scalable.

“We’ve got to build our platform so that is readily localisable. So it’s basically a platform that we can put in different content according to different countries.

“We have a person on the ground in the UK who has existing relationships with schools and councils in the UK, helping us sell to them. We have run successful trials of our education platform in primary schools in Nottingham. We plan to be in 180 schools in the UK this year, and we also have a trial school in Parma in Italy.”

The company is based at the NovaUCD innovation centre as a ‘spin-in’ as opposed to a spin-out. “We’re a small company who had a service and came in and which is trying to build a relationship with researchers in order to commercialise our research and have a positive economic impact and social outcome.”

Kenny previously worked as a licensed aircraft inspector and also owned a manufacturing business, but went back to college to study an MBA at the Smurfit Business School at UCD, where he had the idea for Zeeko.

There were several challenges in getting started, not least on the HR and technology development side. “People are always a challenge so it’s trying to get the right people and retain the right people as well. Fundamentally, people drive businesses forward.”

He also had to square several circles when it came to running on limited financial resources, but the company has benefited from funding from three different sources.

The first was from Enterprise Ireland’s Competitive Start fund in 2015, followed by aforementioned Horizon 2020 SME Innovation Associate programme, and the third and most recent was from SME Phase I, another Horizon 2020 fund that will enable Zeeko to do a feasibility study about scaling what it is doing across Europe.

But as an entrepreneur with some skin in the game, Kenny believes succeeding in his environment requires perseverance above all. “I think the road is long. I don’t believe in failure, I only believe in temporary setbacks. So I believe that if we work hard and if we never give up we’ll be a success.”

Having a strong team around, whether that’s the team you employ or moral support from outside, is also crucial. “I suppose I started this business on my own, I don’t know necessarily if that’s the best way to do it, but I have some pals who are in the same position who bring me along,” he says.